I love mushrooms. They are without a doubt my favourite veggie in the world. My love affair with fungi started way back when I was little and my mom would buy canned mushroom pieces to make english muffin pizzas for my sister and I – and we would slurp those slimy little suckers straight out of the tin. Yum!

Once I switched to a plant-based diet, mushrooms became my go-to meat replacement. Marinated Portobello mushrooms instead of burgers, ground mushrooms in chili, burritos and sauces and mixed mushrooms in soups, stirfrys and pasta. I could honestly eat them every day.

Unfortunately for me – my family isn’t so keen. My husband will pretty much eat anything I prepare without complaint (bless his heart) but I would go so far as to say that my kids downright hate them. Even my impassioned speeches about the health benefits of mushrooms have had no impact. They just roll their eyes and push a sad-looking pile of brown bits to the side of their plates at mealtime.

My daughter is at an age now that she likes to take a bigger role in preparing meals and I am only too happy to step aside and let her create. But I have noticed that she “conveniently” seems to skip the mushrooms in the dishes she prepares. And that inevitably leaves me with extras at the end of the week.

Just recently I opened my fridge to discover 4 lonely looking containers of mixed mushrooms staring back at me. And I immediately had a craving for cream of mushroom soup! Yes I know it’s spring but this particular day was chilly and rainy and soup sounded just about perfect. And the kids were off at school so I knew I wouldn’t have to listen to their bitter complaints about how gross mushrooms are…..and as an added bonus I could eat the whole batch myself : )

This soup has only a few ingredients, it’s super easy to throw together and it tastes amazing. So if you are a fellow fungus-lover – give this soup a try and slurp up the healthy mushroom-y goodness. It’s a winner!

Remove mushroom stems and chop into pieces. Heat a soup pot over medium heat and pour in oil. Add onion and saute for 1-2 minutes until starting to soften. Add in mushrooms, salt, pepper and sage and stir to combine. Cook for 6-8 minutes until very soft. Add vegetable broth and bay leaf and bring mixture to a boil. Once boiling, reduce heat to low and simmer for 30 minutes.

Meanwhile, make cashew cream by rinsing soaked cashews under cold water and putting them into a high-speed blender. Add water so that they are covered over by 1-inch and blend for 1-2 minutes until very smooth.

Once soup has simmered, remove bay leaf and pour in the cashew cream. Stir to combine and add salt and pepper to taste. Enjoy!

Cream of mushroom soup was my absolute favourite as a kid. I loved that strange sucking sound the soup would make when it flopped out of the can, the way it would keep the shape of the can even when I plopped it into the pot and those gloopy glops of cream that never quite separated even after vigorous stirring. Mmmmmm…..

In fact, I loved most cream soup as a kid but I have mostly avoided them over the last few years as my diet has shifted away from dairy and most processed foods. So you can imagine my absolute delight when I discovered that my beloved cashew cream is not only great for making lattes but can also substitute for cream in a thick, delicious and rich soup.

This soup is the perfect lunch or dinner for these cold winter days. It comes together quite quickly and is hearty, nutritious and delicious. And did you know that in addition to being so darn yummy, mushrooms are also incredibly healing? (I can almost see my friend Dana rolling her eyes and saying “but they are grown in poop” ; ) Yes they are a fungus and some are grown in compost but check out these interesting mushroom facts from nutrition expert Meghan Telpner:

–          Medicinal mushrooms have been proven as a valuable treatment option to help people heal from cancer. It’s been known forever in Chinese medicine and in alternative health care, and now there is even some science to back it up.

–          Research has come out showing that mushrooms and mushroom extracts are potent cancer fighters. It seems that this is especially the case for breast and prostate cancers. This is no wonder as mushrooms have long been considered a healing and special food. The ancient Romans and Egyptians considered them a gift from the Gods while the Chinese saw them as the elixir of life.

–          Mushrooms contain CLA which slows down the activity of an enzyme needed to make estrogen. Since cancers of the sex organs are fuelled by high levels of estrogen, mushroom extracts may be super important in helping us steer clear of these cancers.

–          Mushrooms contain “beta-glucans”, a special type of carbohydrate (specifically found in the Maitake variety). In the lab, beta-glucan was shown to annihilate prostatic cancer cells.

–          Mushrooms are a source of selenium. It has been shown that men who consume high amounts of selenium in their diets are at a decreased risk of developing prostate cancer. Selenium may also slow the rate of tumour progression in the case of prostate cancer.

–          Medicinal mushrooms such as Reishi, taken in their extract form, are believed to enhance the immune responses of the body. This helps your body overcome disease making it a strong fighting-machine. Research has shown that regular consumption of medicinal mushrooms is associated with a lower death rate from cancer.

So try out this amazing creamy, healing and heart-warming soup. I will admit that I kind of missed the glops and there was no tin can shape but the taste was just like the old days….maybe even a bit better. Yummy!

Prepare cashew cream as directed here and store in the fridge until ready to use.

Heat a soup pot over medium heat. When pot is hot add 1 tsp of salt and cook for 1 minute. Add olive oil and heat for 30 seconds more to create a non-stick effect. (being careful not to let the oil smoke).

Add onion, garlic and mushrooms to the pot and cook for 6-10 minutes until they are very soft.

Dissolve bouillon in hot water and add to pot. Add bay leaf and bring the mixture to a boil.

Reduce heat to low, cover and simmer for 20 minutes.

Add cashew cream and continue to simmer for 10 more minutes.

Remove bay leaf and season with addition salt and pepper if desired. 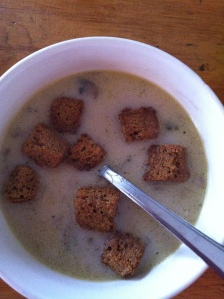 Serve plain or with croutons or crackers. Enjoy!