“We are born with rights. And whenever you are free to enjoy those rights it’s the best. And I think Toronto WorldPride gives you the best opportunity, at this moment, to enjoy it and just live freely. It’s very important to bring people all over the world together, people who in their country don’t have the opportunity to speak out, to have a voice. And I think this platform gave people from around the world a voice in the fight (for) getting acceptance and battling intolerance back home.” 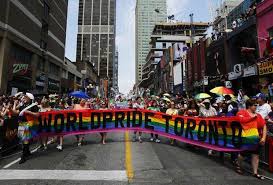 I’ll admit it  – when a producer friend asked me if I would be interested in doing live description for visually impaired people in the accessibility tent at the World Pride Parade on June 29th of this year- I felt excited, unprepared and a little scared. Although I’ve become quite proficient at doing described video for television and movies this was a whole different ball game. I’d have no script, no lead time and no second takes. I was going to be stationed behind a microphone at the front of the tent- directly on the parade route- describing the action as it passed by right in front of me. Yikes!

And this was no ordinary parade. Approximately 12,500 people registered to participate in the event (a record-breaking number)- either on foot, in a vehicle or on one of the 285 elaborately decorated floats. This was the first WorldPride celebration ever held in North America, and the 4th such festival in the entire world. There were throngs of international marchers and floats, students from colleges and universities, police officers, clergy and religious organizations, politicians, celebrities, support groups, special interest groups, families, full bands, drag queens and legions of supporters dressed in elaborate and outrageous costumes cruising along the route while grooving and shaking to thumping dance music. 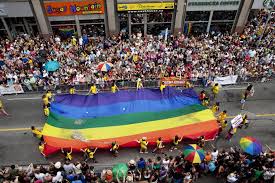 As I stepped into position to begin my first shift (I thankfully shared the task with a fellow describer), onlookers from a balcony at a hotel directly behind me fired a few synchronized confetti canons with a thundering boom. Honestly, I almost peed my pants. Shortly after as I was leaning out into the street to get a glimpse of the next float (still shaking from nerves and the reverberations of the canons) a man dressed in a flowing blond wig, full makeup, a fabulous shimmering bright red ball gown and 4-inch Lucite heels smiled in my direction . He sashayed over to me, grasped my hand, looked me in the eyes and said with the biggest and most sincere smile on his face “Happy Pride my friend!” It was the first of many such heart-warming encounters I experienced during the course of the day and it put most of my nerves completely to rest.

One of the trickiest things for me turned out to be terminology. I was very worried about offending people by using the wrong pronouns (he and she), I wanted to make sure I was correct in my assumptions (drag queen? man dressed as a woman? woman dressed as a man?), I wanted to be as delicate as possible when describing nudity (bare-chested, bare bottom, half-dressed, no pants, no shirt, low-cut)…and I had to come up with a million different ways to describe a rainbow ; ) Plus because the accessibility tent was filled to over capacity, my fellow describer and I had to stand outside in the full mid-day sun to do our descriptions. And it was freakin hot! The sweat beaded up on my forehead and dripped down my back all afternoon. The only relief was a nearby hotel that generously offered up their air-conditioned lobby as a resting place and the blessed water guns and hoses that parade marchers kept firing – sometimes directly into my face! 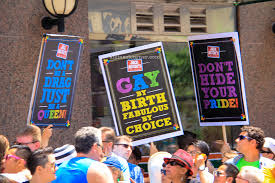 As the afternoon wore on, I got much more comfortable in my role. The patrons in our tent seemed genuinely happy with the description and the joy and excitement from both the parade marchers and the unbelievably huge crowd lining the street was infectious. I chuckled to see some of the outrageous costumes (so many bright colours!), I danced along with shirtless firefighters who offered up a private booty shake for the front row patrons in our tent, I was impressed by the members of Dykes on Bikes who took the time to get off of their motorcycles, pose for countless pictures and hug the people lining the street- and I was most moved by all of the parents, grandparents and family members who proudly marched hand in hand with their lesbian, gay, bisexual and transgender children.

Although the parade started at 1pm, it was still going strong at 5pm that evening…and I was really starting to fade. The intense heat started to take a toll on me and my fellow describer and at one point he looked down the route and announced that the Pfizer hot air balloon shaped like a Viagara pill was drawing close – “they just can’t seem to keep it up!” he said. As the nearby crowd giggled away he leaned over to me and said “I think I’m starting to get a little punchy.” As he wisely noted – apparently heat stroke and description aren’t a good match.

I politely took my leave not long afterwards. And as I rode the Go train home the exhaustion finally set in- my feet were throbbing, my volunteer t-shirt was covered with grime and my hair was plastered to my head from a combination of sweat and countless water gun shots to the head. But although I was pooped – I  also felt incredibly proud to have been part of such a joy-filled event centered around diversity and inclusion.  How lucky I am to have a job that allows visually impaired citizens the opportunity to fully enjoy the delights of a live parade and to live in a country where differences are not only accepted but also embraced and celebrated!

So – will I do it again next year? You bet your bare-naked, rainbow-painted, bejeweled, glittering, leather-clad ass I will.