Earlier this week I went on a field trip with my littlest guy who is in junior kindergarten. “A lovely day at a nearby pumpkin patch” was what it said on the form that he brought home. “Spend time at a local farm learning about agriculture and the importance of farmers in our society.” Wow – it sounded so inspiring that I immediately signed up as a supervisor. I could picture my son and I hand in hand skipping through the field whilst the sun shone down on the gleaming orange pumpkins and reflected off of the smiling faces of his classmates.

Unfortunately the reality was not so lovely at all. In fact I would categorize the day as one of the most miserable I have spent in recent memory. It was bitterly cold and the rain poured down incessantly from the time we loaded onto the bus until we arrived back at the school drenched and grumpy.

Aside from getting to meet my son’s classmates and their parents and having the opportunity to spend some quality time with my youngest – the day was a wash (quite literally actually). We tried desperately to huddle under flimsy umbrellas but even the most hearty kids and adults ended up soaked to the skin. The barns and covered buildings were damp and chilly and inevitably the kids started losing it- some falling face first into mud puddles and others shaking and blue lipped from the cold. Good times!

Fortunately however there was one bright spot amongst the deluge of rain and the dripping snotty noses and the incessant whining (coming mostly from me btw). As we were all huddled up under a sheltered area watching an incredibly sappy cartoon about dancing and singing pumpkins, a fellow mom tapped me on the shoulder. “There’s hot apple cider for the parents over on that counter” she said. And it was all I could do not to kiss her then and there!

I practically tripped over the children to get at that urn of cider and it was quite possibly the best thing I have ever tasted. Hot and sweet and comforting……like a warm hug on a crappy day. I sucked back every last drop and as I was making a beeline for another cupful, the same mom leaned over and whispered “the only thing that would make that cider better would be a stiff shot of rum.” And that time I did kiss her ; )

This recipe is my own take on the cider that I drank on that day. I made it as delicious and healthy as possible (thanks to inspiration from Meghan Telpner’s recipe) and I think it turned out pretty darn tasty. And since I made this batch at home – I did add in that shot of rum. And you know what? It WAS even better! In fact, after a few glasses – I practically forgot all about that horrifying field trip ; )

Wash and cut apples into chunks (skin on). Place apples in a large sauce pan with the cinnamon sticks, nutmeg, allspice, maple syrup and goji berries. Cover with water. 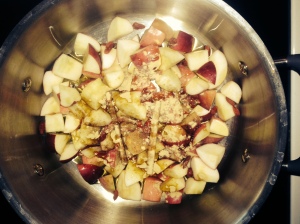 Bring to a boil then reduce heat to simmer. Cover and let simmer for approx 1 hour until the apples are mushy. Remove from heat and take out the cinnamon sticks. Strain the cider through a nut sack (insert joke here) or through a mesh sieve. Pour into mugs and add a generous shot of rum to each if desired. Enjoy!