Before I had children and while I was still figuring out my career direction, I spent a few years as a public relations consultant at an agency in downtown Toronto. Although I realized pretty quickly that this particular career path wasn’t the one for me – I did learn a lot during those years and I am especially thankful for the people I met, the skills I honed and the fun I had during that time.

If I am being completely honest, one of my absolute favourite things about working in the middle of a big city was the opportunity to grab some friends and head out for lunch at one of the many amazing restaurants in the area. And there was one particular little spot close to my office called Yummy & Healthy that I absolutely adored. I went there so much that the sweet owner got to know me and would start prepping my Vegetarian Pho Soup as soon as I walked in the door. I couldn’t get enough of that fragrant and spicy broth and the heaping portions of rice noodles, veggies, sprouts and tofu…..delicious!

I have tried many times over the years to recreate that soup and I just haven’t been able to hit the mark…until now. I was fiddling around with a recipe from a recent edition of the Vegetarian Times Magazine and bingo-  I came pretty darn close!

The key to this Pho soup recipe is all in the broth. I threw a bunch of herbs and spices into a big pot and let it all cook together for at least an hour. Then I strained everything out and was left with a tangy and delicious base to build upon. Once the broth is ready to go – I simply simmered my add-ins of choice right in the soup. (However, if you are adding noodles, I would recommend cooking them separately and putting them into the bottom of your serving bowls and scooping the soup over top so that they don’t get too mushy.)

Although Yummy & Healthy is no longer in business, I’m paying homage to the owner and to the many trips I took to that restaurant with this recipe. Wherever the owners ended up – I’d like them to know that the young woman with blue eyes, the sloppy French braid and the ill-fitting Fairweather suit who sat in the corner slurping her noodles would like to thank you for the inspiration : ) 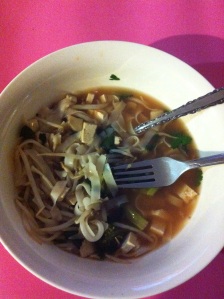 Place vegetable broth, lime pieces, garlic, cinnamon stick, cilantro stems, tamari and agave into a large soup pot. Bring to a boil and then reduce heat to low and simmer uncovered for 30 minutes to 1 hour. Strain and throw out flavourings. (At this stage you can make your soup right away or save the broth to use at another time. It also freezes well.)

Prepare rice noodles according to package directions, rinse and set aside.

Bring broth back to a simmer and add in tofu, broccoli, bok choy and mushrooms and simmer for 5 minutes. Add sprouts and cook 1-2 minutes longer.

Scoop a generous portion of noodles into the bottom of a soup bowl. Top with broth and veggies and sprinkle with cilantro. Add additional tamari and sriracha for flavouring if desired.